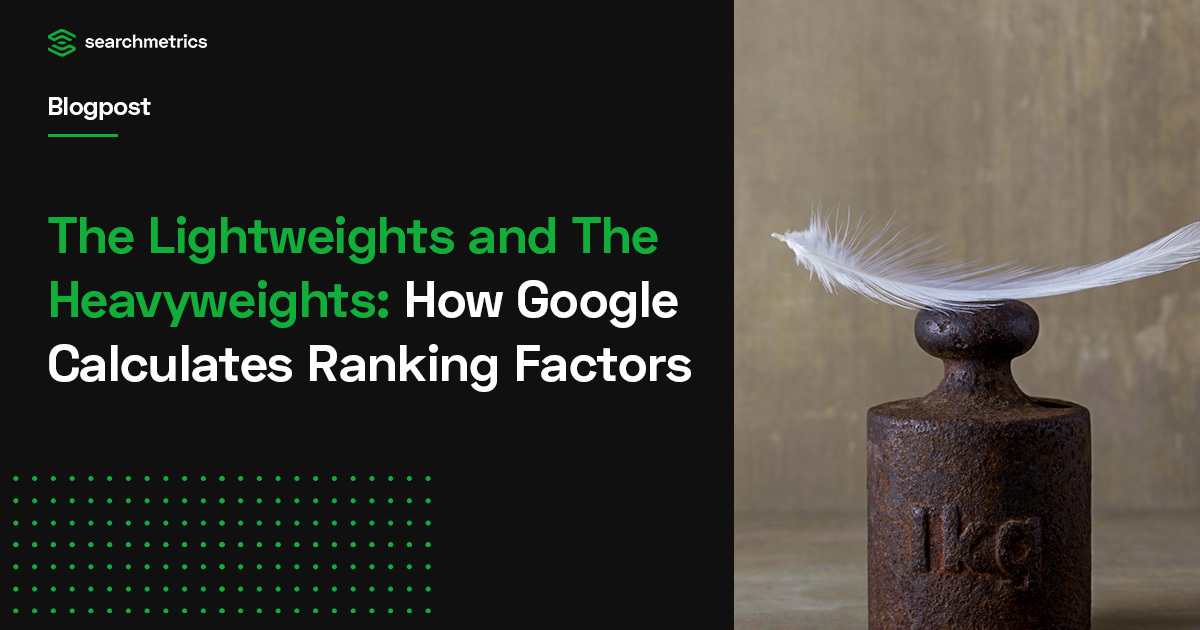 We are constantly being asked questions about the importance of ranking factors. Google experts have now shed some light on how changes introduced through their updates affect search results. They’ve confirmed that the new page experience factor, which is part of Google’s Core Web Vitals, should only have a minor impact on rankings.

Google experts on the difference between the lightweights and the heavyweights

Whenever Google releases one of its updates, the relevance of certain ranking factors, or ranking signals, to use the Google term, is affected or new KPIs are added. According to Google, the weighting of their signals is often divided into two categories: heavyweight signals, which have a considerable influence on the rankings, and minor signals, which have a minimal impact only. Google Search advocates John Müller, Martin Splitt, and Gary Illyes discussed how Google’s algorithm treats the differently weighted signals in their “Search Off The Record” podcast from May 2021.

According to Gary Illyes, the aim of Google updates is either to solve a bigger problem or influence the development of the web in a certain direction by introducing new ranking signals or changing their relevance.

When new heavyweight ranking signals are introduced in Google updates or their relevance is altered, it is usually done to solve a more serious problem, such as fake news or spam. According to Illyes, an update roll-out can always have undesired effects, too, e.g., a negative effect on click-through rates, which are often lower for reputable sites than for “fake” sites that tend to rely on clickbait.

Lightweight changes to certain features are seen as more of a tiebreaker, meaning they can impact which sites will rank higher if other signals are similarly good. According to Google, ranking signals that act as tiebreakers are supposed to bring about minor improvements or influence the web in a certain direction.

When Google rolled out the update that introduced HTTPS as a ranking signal, it was designed to be a tiebreaker right from the start. It shouldn’t fundamentally change the quality of the search results, but the objective is to give websites with HTTPS a little boost, informing users and, more importantly, website operators about secure and encrypted connections.

Illyes explained that, after the roll-out, the effects of changes to search results and the click and search behavior of users were analyzed. In the case of HTTPs, the importance of the ranking signals was reduced four or five-fold until the desired effect was achieved.

In the podcast, the Google Search advocates then discussed the effects of ranking signals for a hypothetical search engine – their statements may, but need not, match the Google setup.

Illyes believes a hypothetical ranking factor like page speed should be a minor factor. “You don’t want to sacrifice relevancy for speed,” says Gary. But, John Müller added that speed is not entirely unimportant for users, “If we can show people ahead of time that what they’re going to click on is going to be slow or is going to be reasonably fast and useful, then I think that does help people to figure out a little bit better what is useful for them.” This is especially true in cases where there are several good search results for one query. Page speed would then be the tiebreaker.

“If we can show people ahead of time that what they’re going to click on is going to be slow or is going to be reasonably fast and useful, then I think that does help people to figure out a little bit better what is useful for them,” explains John.

If we presume that the search advocates’ assumptions apply not only to their hypothetical search engine, but also to Google, then Google’s new Page Experience Ranking Factor is also likely to be a minor signal that decides the ranking between two websites with similar ranking features. Page experience is primarily about the technical aspects of a user-friendly website, especially with regard to load times, images and interactivity. Its core metrics are outlined in Google’s Core Web Vitals.

However, bear in mind what John has to say on the subject: I think it makes sense to offer a good user experience with regard to speed and usability. And that’s why these metrics should not just be seen as fixed targets determined by Google, but as objectives for every website in terms of user satisfaction.

Ranking correlation analyses to determine the importance of ranking factors

Only Google knows which ranking signals are more important and which are less important. However, it is possible to reverse engineer the data and arrive at a meaningful conclusion on this.

Searchmetrics has conducted a series of specific correlation analyses. The resulting values, which lie between -1 (no correlation) and +1 (high correlation), indicate how much websites differ on one particular characteristic. So if the correlation is high, it means that top-ranking pages have better values for a given ranking signal. However, this does not yet mean that improving your own values for a certain ranking signal will automatically get you good rankings – the Google algorithm is too complex for that and combines hundreds of ranking signals.

Core Web Vitals as a ranking factor? Here’s what our Searchmetrics study had to say

In the past, Searchmetrics carried out correlation analyses of ranking factors to provide an overview of the characteristics that top-ranking websites have plenty of, or even lack.

Searchmetrics recently published a study on the Core Web Vitals, which were rolled out in a June update to the Google algorithm containing the new Page Experience Ranking Factor.

The findings show that if we look at the three main KPIs of the Core Web Vitals – Largest Contentful Paint, Cumulative Layout Shift, and Total Blocking Time as a proxy for First Input Delay – we see that these Core Web Vitals metrics have positive correlation coefficients ranging from 0.05 to 0.18. This means that top-ranking websites have better overall scores in Core Web Vitals.

However, many websites don’t only achieve a positive ranking correlation with the three main KPIs of Core Web Vitals, but with other metrics as well. In many cases, it’s about the images displayed and their degree of optimization.

Google is generally very shy about giving out information on how individual ranking signals determine search result positions in their algorithm. So the podcast with John Müller, Gary Illyes, and Martin Splitt provides some rare insight.

Even though the Google algorithm remains a well-kept company secret, ranking correlations generated by software providers such as Searchmetrics offer an initial insight into the characteristics of the various ranking factors for top URLs in Google’s search results. Our analysis of the Core Web Vitals, which include the Page Experience Ranking Factor, showed that top-ranked websites usually achieve better results on Core Web Vitals.

Have you been impacted by a Google update?

Get in touch with our SEO Experts for a free no-obligation chat about who they can help reverse the impact of a Google update on your website.